Long ago, a sect of swordsmen known as the Sword of Logos protected the Book of Ancients, a powerful tome of history that contains everything known to man; myths, creatures, stories, science, technology, and the evolution of human civilization. However thousands of years ago, a traitor working for the Megiddo tried to steal it for himself. As a result, the Book vanished and each of its pages scattered across the world. Fast-forward to present day, young novelist Touma Kamiyama has been having dreams of another dimension where he witnessed swordsmen and monsters coming out of a storybook, and a “mysterious girl” calling for help. One day, a strange phenomenon suddenly occurs; a part of the city had disappeared. As people’s loved ones disappear one after another, it sends the entire nation into chaos. 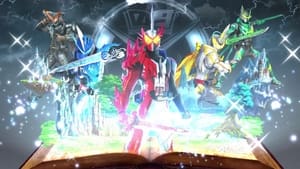